For an extremely long time I had stuck to the idea of only having one return statement in a method/function. I've s… twitter.com/i/web/status/1…

Posted at 8:52am by Jason in Web development

Well, I’ve given it a good go, but for me this is the end of the road for Netbeans (for the time being).  There wasn’t a lot in it to be honest and Eclipse does have its drawbacks too, but in the end there were just some features that I decided I missed too much.

There is a handy function search in Eclipse that can be invoked by ctrl+o(on a PC anyway, the Mac key bindings probably include the apple key).  A dialog pops up listing all the functions/methods in the current file, nicely organised into classes if they exist in the file. Just start typing at the top to filter the list and quickly find the one you are after. 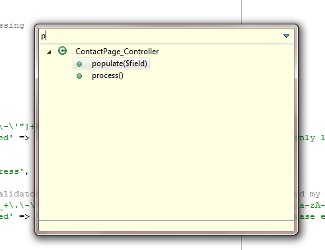 So far I’ve not found an equivalent in Netbeans. A file explorer is provided that lists all the functions/methods in the current file (as does eclipse), but lots of times and especially in long code files, it is just handy to pop up the filter and search rather than having to switch over to the explorer and start scrolling about.

I’ve mentioned several times that the SVN integration is something, in my opinion, that is handled much better in Eclipse with the Subclipse plugin. The real winner here is the SVN perspective that acts as a full repository browser and fully featured SVN client.

This point may be a little harsh as code completion is really quite good in Netbeans, and it may be that I’ve just not found the keyboard shortcuts for it yet. Showing what arguments are taken by a function.

Netbeans does provide this feature, but I’ve had to invoke it by going into the menus. That does tend to slow you down a little.  To obtain a list of potential functions/methods, pressing ctrl+space on both will provide a list.  Once you are at the arguments, pressing shift+ctrl+space in Eclipse provides a list of available arguments, also highlighting which one you are currently at – handy for log argument lists. Ok, the arg list usually appears when you first open the parentheses, but if you go back and want to see the list usually I’d have to do something like start retyping the function and opening parenthesis to invoke the argument list.

I did mention earlier these points were small.

Netbeans does have some very handy features that Eclipse does not, no argument there.  One of the really nice ones is the CSS preview. Like most features, I discovered this one by accident. No idea why the preview window appeared, but it was a nice surprise.

Unfortunately, I’m not a great one for using visual building tools like this, so it didn’t really swing it for me.

A big point, and on reflection I may need to reconsider, is the memory footprint.  It is much, much lower than Eclipse. With that is the start up time.

The door is still open.

Sorry, the comment form is closed at this time.